Decorations from Waterloo to the first Boer War

The Regimental museum at Cardiff Castle holds a comprehensive collection of medals ranging from Waterloo 1815 to Kosovo 1999, of which only a few are shown here. In the collection there are over one hundred individual campaign medals and ninety medal groups. The Museum holds four of the five Victoria Crosses presented to members of the regiment the fifth is with the family of the recipient in Australia. There are medals on display in the museum for: 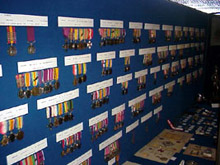 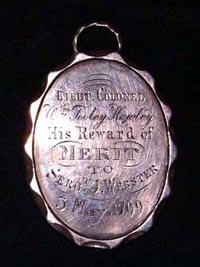 Until the institution of the Victoria Cross, as a reward for gallantry at the time of the Crimean War there had been no recognition of acts of bravery, although in some regiments such deeds of valour or long service were sometimes rewarded by a medal produced and presented by the Commanding Officer. The earliest medal recorded to the regiment was presented by Lieutenant Colonel Wm Tooley Hawley to Sergeant J Webster in May 1799. His Reward For Merit. 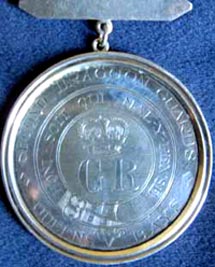 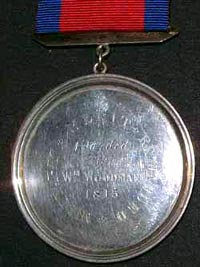 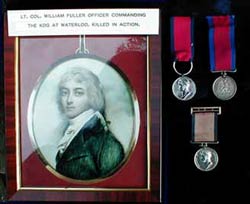 The Waterloo Medal was the first general medal issued by the British Government to all soldiers present at Waterloo. It was also the first campaign medal awarded to the next of kin of men killed in action. Lastly, it was the first on which the name of the recipient was impressed around the edge by machine. 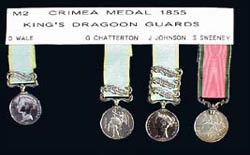 The Crimean War Medal commemorated some of the most famous and infamous-military operations undertaken by the British Army. The clasps Alma and Inkerman commemorate the defeat of Russian armies in pitched battle in the winter of 1854, while Sebastopol recalls the appalling suffering and gallantry of British troops in the trenches before the Russian naval base. The most famous action the ‘Charge of the Light Brigade’ and the defence of Britain’s naval base, is recalled by the clasp Balaklava.

The first royal warrant for the Victoria Cross was published in 1856 specifying that the award should be made regardless of rank, for outstanding acts of courage ‘IN THE PRESENCE OF THE ENEMY’

On the 28th September, 1857 during the Indian Mutiny at Boolundshuhur, Lt Blair, one sergeant, and twelve troopers were ordered to bring in an abandoned ammunition wagon. On approaching the wagon the party was charged by about sixty horsemen. Lt Blair led his little party against them and cut their way through, Lt Blair personally killed four mutineers. All members of the party reached camp safely, although Lt Blair was wounded and later died of his wounds. 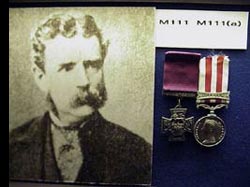 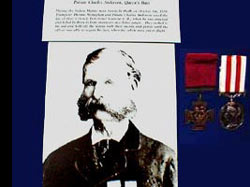 During the Indian Mutiny near Sundeela Oudh on October 8th 1858 Trumpeter Thomas Monaghan and Private Charles Anderson saved the life of their Colonel, Lt. Colonel W H Seymour C. B., when he was attacked and felled by thirty to forty mutineers in a dense jungle They rushed to his aid and held off the Sepoys with their swords and pistols until the officer was able to regain his feet, when the rebels were put to flight. 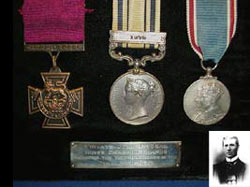 During the battle of Laing’s Nek during the first Boer War, on 28th January 1881, Private Doogan saw that Major Brownlow, KDG had had his horse shot from under him and was dismounted among the Boers. Doogan rode up and, in spite of being severely wounded himself, dismounted and insisted on Major Brownlow taking his horse. Whilst doing so Doogan was wounded a second time.