The next major changes came in 1794 and 1796 when the coat was shortened to allow it to clear the saddle when mounted, epaulettes were abolished, being replaced by a yellow shoulder straps with wings of red and white cloth interlaced with brass plates. As the coats were worn buttoned down the front, the waistcoats could no longer be seen. 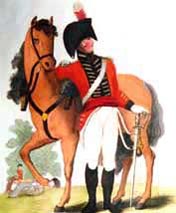 The KDG had gold lace and blue facings, while the Bays had silver lace with black facings. Breeches were plush instead of leather. The wearing of cocked hats was discontinued, and a large hat of black felt was introduced for both regiments, turned up at front and back, and worn with a red and white feather. This enormous hat was augmented in 1804 by a watering cap. There is a KDG watering cap in the regimental museum: it is a tall cylindrical cap with a peak, and the regimental monogram in brass on the front. In 1890 a Bays’ watering cap of this period was exhibited at the Royal Military Exhibition; it was cylindrical in shape, of black leather, like that of the KDG but without a peak, and on the front a yellow metal plate with the royal arms surmounted by a scroll with the words ‘2nd or Queen’s Dragoon Guards’. It also had a bag of plain leather attached to the crown. A carbine and single pistol replaced the musket and bayonet and two horse pistols. The heavy cavalry sword had a broad straight balde, thirty-five inches long, ending in a hatchet point, the guard being a steel knucklebow.

In 1803 NCOs were ordered to wear chevrons, formed of a double row of regimental gold lace: four for a sergeant major and quartermaster sergeant, three for a sergeant, and two for a corporal. In 1808 the wearing of pigtails was abolished, although the KDG continued to wear theirs until 1809. 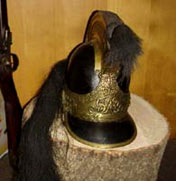 A major change occurred in 1812 when a new helmet was issued, often called the ‘Waterloo’ helmet. It had a black leather skull piece with a metal crest and plate bearing the name of the regiment and a reverse G.R. cypher. To the front of the metal crest was fixed a little tuft of black horsehair, which then swept back into a long flowing tail which hung down behind. A new coatee or jacket came into use, which did away with the bars of lace across the front and substituted broad lace from the collar down to the waist, and around the skirt and cuffs. This jacket was fastened by hooks and eyes down the front, instead of buttons.

The parade breeches remained white, and were worn with jackboots; but on active service pantaloons of grey with short boots were adopted. A narrow sword belt replaced the old broad one, and short gloves replaced the gauntlets on service.

In 1820 the Prince Regent became George IV, and his interest in dress led him to take much personal pride in the elegance and turnout of the Army. In 1822 dress regulations were issued, the short coats being replaced by a single-breasted coat decorated with cross-bar lace and fastened by eight buttons. On the lower sleeves and skirts were four V-shaped loops of lace with a regimental button in the centre, the loops being arranged in pairs. The material for overalls was changed from grey to blue. The dress sabretache became very elaborate, and the helmet was ‘Roman black glazed skull and peak, encircled with richly gilt laurel leaves, rich gilt dead wrought scales and lions’ heads: bear skin top’. The great bearskin crest made it a most imposing but difficult ornament to wear. In 1829 the lighter blue trousers were changed to dark blue with a yellow stripe. A picture in the Royal Collection at Windsor Castle by Dubois Drahonet, dated 1832, shows a sergeant of The King’s Dragoon Guards wearing a black leather sabretache, and in the centre a brass star surmounted by a crown, and the letters ‘K.D.G.’ in the centre of the star.

He is wearing the black dragoon guard helmet with the high bearskin comb. His jacket is of scarlet cloth with blue velvet facings, and the cuffs of the sleeves have four loops with tassels arranged in pairs. The overalls of blue with a yellow stripe were worn by both the KDG and the Bays. A KDG inspection report of 1834 remarks: 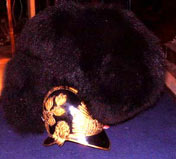 In 1834 the black helmet was changed to an all-brass helmet with a metal crest terminating in a lion’s head, which was removable to enable the large bearskin crest to be fitted for full-dress occasions. Epaulettes for full dress were ‘boxed’ with a bullion fringe. Metal shoulder scales were worn in undress, and the KDG had the word ‘Waterloo’ on a silver scroll and the monogram ‘K.D.G.’ also in silver. At lev’es the officers of both regiments wore a large cocked hat with a gilt embroidered ornament and a seventeen-inch red and white swan plume. In undress a single-breasted blue frock coat with scale epaulettes was worn, with a round blue forage cap circled by a band of regimental lace, and with a black patent leather peak. Both regiments wore a scarlet cloak with a white lining.

The KDG in Canada from 1838 to 1843 were issued with special winter clothing of a full-length blue overcoat with brass shoulder scales, and held in by a white belt and a white pouch belt; knee boot, fur gloves, and a fur cap with a flap to cover the neck and ears, and a red side flap. Colonel Cathcart, commanding the KDG in Canada, reported:

I have been able to give every man a pair of jackboots. (They) are quite waterproof. They have the art of making them so here by putting the smooth side of cowhide leather outside, and then making a particular composition of wax and boiled oil. . . The boots are made large enough to wear a long stocking over the sock, inside of the boot, and pulled over the knee. 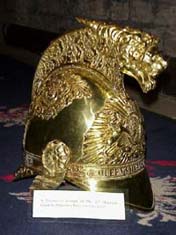