In March 2003 the QDG deployed to Kuwait with the 1st (UK) Armoured Division. A Squadron was attached to 7th Armoured Brigade, B Squadron was used as divisional troops, C Squadron was attached to the Commando Brigade and HQ Squadron was tasked to build and man the first POW handling camp just inside the Iraqi border. During Operation TELIC the QDG again served with distinction and raised the profile of formation recce. On return from Iraq the Regiment moved to Imphal barracks Osnabrück, Germany. After being stood down from Northern Ireland training, because of the success of the peace process there, the QDG were sent on another tour of duty in Iraq with the 4th Armoured Brigade on Op TELIC 5. ‘B’ Squadron were deployed on Op BRACKEN with the Black Watch Battle Group and the remainder of the Regiment deployed to the Al Muthanna province where they undertook a relief in place with the Dutch Battle Group. On their return from Iraq in 2005, Brigadier Rose of 3 Commando Brigade presented the Regiment with the Commando Dagger in recognition of the superb relationship between ‘C’ Squadron and the Royal Marines during the liberation of Iraq. It is of note that this squadron had the distinction of spending one of the longest periods of constant contact with the enemy for 20 days or so during this operation. In 2006 the QDG deployed again to Iraq on Op TELIC 8 and oversaw the successful transfer of Al Muthanna province back to Iraqi control.

At the end of 2007 the Regiment left Osnabrück and moved to Dempsey Barracks, Sennelager where they trained for a six-month deployment to Afghanistan as part of 3 Commando Brigade. Here they carried out a variety of frontline tasks across Helmand province. ‘C’ Squadron was the first to deploy to Afghanistan to take over as the ‘Mastiff Group’, crewing this new armoured vehicle designed to give protected mobility in high risk areas and was split with the bulk supporting the 2nd Battalion Royal Gurkha Rifles Battle Group in Musa Qaleh. Regimental Headquarters, Headquarter Squadron and ‘A’ Squadron formed the core of the QDG-led battlegroup based in Garmsir, half of ‘A‘ Squadron was deployed in CVR(T) and the remainder in Jackals. ‘A’ Squadron was heavily involved in the successful attack on the Taliban strongholds in the area known as the Snake’s Belly on the River Helmand.

On returning from Afghanistan the Regiment paraded through Swansea being honoured with the Freedom of that city, this was followed by parades through Hereford, Wrexham and Chester. The last event in this tour of recognition in its recruiting areas was a parade in Cardiff Castle with the Colonel in Chief His Royal Highness The Prince of Wales on 31st July 2009. This was the Golden Jubilee to mark 50 years of loyal service by 1st The Queen’s Dragoon Guards.

QDG spent most of 2010 in training. The highlight of the year coming in June with the Regiment’s participation in Armed Forces Day in Cardiff where it led the Army contingent of the parade. On the same day the Colonel in Chief, Prince Charles, officially opened the Regimental Museum at Cardiff Castle, ‘Firing Line: The Story of the Welsh Soldier’, which is shared with the Royal Welsh. The remainder of 2010 was dominated by a 3 month deployment as the Opposition Force (OPFOR) at the British Army Training Unit Suffield in Canada. As the OPFOR, the Regiment conducted a series of free play exercises against 3 Battlegroups from the 20th Armoured Brigade. The fantastic training opportunities available in Canada ensured the Regiment had the opportunity to prepare for the challenges of a second deployment to Afghanistan as well as providing an opportunity for the entire Regiment to complete a series of challenging adventure training exercises.

QDG were the first Formation Reconnaissance Regiment to deploy to Helmand as the Intelligence, Surveillance and Target Acquisition Group (ISTAR Gp) on Operation HERRICK 15 in 2011. The ISTAR Gp consisted of HQ Squadron, ‘C’ Squadron, ‘D’ Squadron QRH, an Intelligence Company, K Battery 5 Regt RA and11 UAV Battery with ‘B’ Squadron initially detached to the Danish Battlegroup but joining the remainder of the Regiment towards the end of the tour. The Regimental Headquarters was based in Lashkar Gah and was tasked with understanding the local environment, finding the insurgents and then focussing the strike elements of the Group to defeat key insurgent commanders or destroy weapon caches. Being co-located with the Brigade Headquarters and National Intelligence Agencies gave RHQ unprecedented access to intelligence as well as extra resources. This enabled the ISTAR Gp to generate unprecedented tempo in attacking the insurgent networks. ‘C’ Squadron, after an incredibly demanding selection process, became the Brigade Reconnaissance Force (BRF) which was the premier strike force in the entire Brigade and was reinforced with soldiers from over 11 different cap-badges including the Reconnaissance Platoon from 1 YORKS. The Squadron was based with the Support Helicopters in Camp Bastion in order to reduce the reaction time to sensitive intelligence. The BRF conducted over 54 aviation assaults during their 6 month tour, setting a record of 4 in one day, and were responsible for the defeat of a number of key insurgent commanders, the confiscation of 3 prestige weapons and the destruction of over 45 weapon caches. Meanwhile ‘B’ Squadron were responsible for securing the key routes within Helmand and thereby allowing the local economy to flourish as well as improving the perception of security in the eyes of the local population. In the last months of the tour, as part of the ISTAR Gp, ‘B’ Squadron played a crucial role in supporting the fledgling Afghan Army to conduct operations in Yakchal, a key insurgent safe haven. Throughout the tour A Squadron provided the mentors to an Afghan Infantry Kandak (battalion) in Nad-e-Ali; an area that saw the most tangible signs of positive change and gave real hope for the future of the province.

On return from Afghanistan the Regiment conducted a comprehensive adventure training package in southern Germany and over 14 expeditions that ranged from climbing in Uganda, sailing in the Mediterranean to horse riding in eastern Europe before returning to the Wales for home-coming parades in Swansea and Cardiff. The Regiment was then, at very short notice, deployed to provide security at the London Olympics with composite squadrons focussed on supporting the beach volleyball and securing the athletes village.

In 2014 the Regiment deployed on the final British combat deployment to Helmand Province on Operation HERRICK 20.  The principal focus was the protection and handover of Camp Bastion. ‘C’ Squadron formed the Brigade Reconnaissance Force and the remainder of the Regiment worked with the Afghan Army to develop the latter’s capabilities and professionalism.

The future of the Regiment was secured with the Army 2020 announcement that ensured the place of the QDG in the British Army’s Order of Battle as a Light Cavalry Regiment in 1st (United Kingdom) Division based in the United Kingdom. The Regiment moved to Swanton Morley in Norfolk in 2015 as part of 7th Infantry Brigade and was paired with the Royal Yeomanry, a Reserve regiment also assuming the Light Cavalry role. The programme was busy with warfighting training opportunities on Ex DIAMONDBACK at the US National Training Centre in California in September 2016 and again in Summer 2017 as part of US Brigade Combat Teams.  There, QDG proved the utility of light reconnaissance forces in major combat operations. 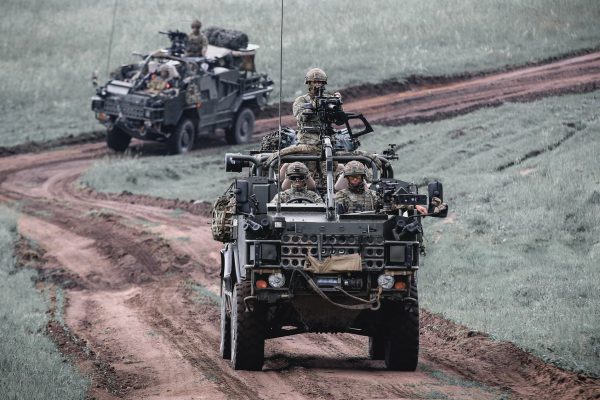 2018 saw the QDG deployed on two six month back to back Squadron deployments to Poland on Operation CABRIT, where they operated within a US battlegroup as part of NATO’s Enhanced Forward Presence to deter a resurgent Russia. This was a return to the deterrence role the Regiment had last participated in as part of the British Army of the Rhine in 1989. 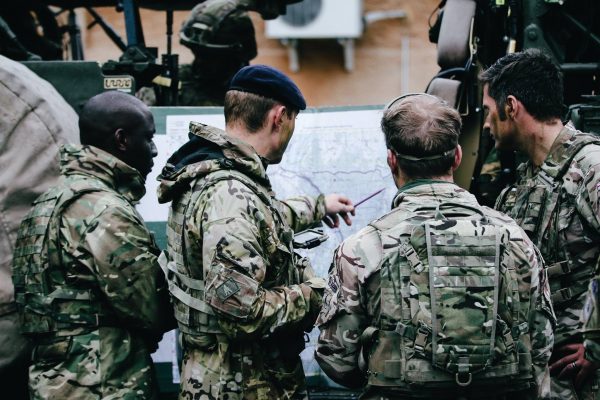 Throughout this period, the Regiment also sent successive Short Term Training Teams to West Africa, the region that 7th Infantry Brigade was aligned to, with particular focus on Sierra Leone where they helped develop the capabilities of the Republic of Sierra Leonean Army. Members of the Regiment also deployed to  Nigeria to train the Nigerian Army in their fight against Boko Haram.

The Light Cavlry role is an exciting one.  Troops operate at long distances, for long periods and with great autonomy. It is a light capability that can deploy by air and can self deploy over large distances. It is a capability that is in increasing demand and we anticipate the Regiment will continue to be busy in the years ahead.