Both the King’s Dragoon Guards and The Queen’s Bays were raised in 1685 as The Queen’s Horse and Peterborough’s Horse respectively. The first mention of uniforms occurs in 1686, when the two regiments were reviewed by James II on Hounslow Heath. The Queen’s Horse (KDG) were clad in long full-skirted crimson coats, without collars, which were faced and lined with yellow, which was the Stuart colour and that of the Queen. Peterborough’s Horse (Bays) were dressed in scarlet, faced in buff and lined with scarlet. The coats were decorated with a large number of buttons, down the front, on the cuffs and pocket flaps, as well as along slits at the back and side (a clothing estimate for the Scots Greys gives ten dozen tin buttons for each coat). The men of both regiments wore leather jack-boots, coming half way up their thighs, known as ‘gambados’, and in 1687 Peterborough’s Horse wore buff breeches. Both regiments had buff gauntlets, broad crossbelts, and broad-brimmed black hats, turned up at one side and worn with a white feather. The cloaks were of red cloth. The officers of both regiments had silver lace on their hats and coats, and silver fringes on gloves and scarf, the latter worn around the waist.

The troopers had a plain crimson sash and wore iron cuirasses, which were ‘pistol proof’, and iron helmets, known as ‘pots’, which were worn under the hat in action and often carried on the saddle bows otherwise. This armour was withdrawn in 1689 and reissued for a short time between 1707 and 1714. The men were armed with a sword, a pair of pistols and , later, a carbine.

Both regiments had a kettledrummer and trumpeters, who were clothed in rich costumes, and a Treasury Paper of 1692 states the cost of that of The Queen’s Horse as being ‘612.8.2’d. For fatigues the men wore a close-fitting coat of coarse grey cloth, often with black facings and buttons.

We have little evidence for the uniform worn during the Marlborough Wars, but an advertisement for a deserter from Cadogan’s Horse in the London Gazette of 1711 gave a red coat faced with green, broad silver lace on the sleeves, sleeves and pockets bound with narrow silver lace, green waistcoat and shag breeches, silver laced hat, brown wig with a black bag. If we replace the green of Cadogan’s with the yellow of The Queen’s Horse and the buff of Peterborough’s, by now the 3rd Horse, we can get an accurate picture.

The accession of George I in 1714 heralded changes for both regiments, The Queen’s Horse changing their title to The King’s Own Regiment of Horse, and their facings from yellow to blue. A portrait of Captain Williams Pritchard Ashurst (who served for a short time in The King’s Horse in 1722) by Peter Tilemans shows him wearing a low cocked hat edged with silver lace, a long scarlet coat with silver lace and buttons, and very long cuffs reaching above the elbow. He wears a yellow waistcoat and breeches, buff gauntlets and no sash. A detachment of the regiment (KDG) is shown in the background riding four abreast, with trumpeters in yellow coats riding greys. This would seem to indicate that the regiment may still have been wearing yellow in 1722. 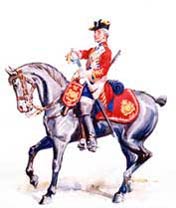 The Earl of Stair reviewed The King’s Horse on 30 October 1742, issuing the following order:

The Horse and Dragoons to take all their small accoutrements to pieces and see that they be very well cleaned and blacked, and then put together again. The bosses, bits and curbs to be as bright as hands can make them. The boots to be as black as possible, and their knee-pieces not to appear above three inches above the boot-top. All their arms to be as bright as silver. The whole buff accoutrements to be of one light buff colour, the swords to be all brightened. The hats new cocked. Three straps to each cloak. Care to be taken that the men do not ride too long. Horses to be all trimmed and made as clean as possible. No Trooper or Dragoon to appear in the streets with his cloak on.

A Royal Warrant of 19 December 1746 changed the status of both the KDG and the Bays from Regiments of Horse to Dragoon Guards, they becoming ‘Our First, Or King’s, Regiment of Dragoon Guards’, and ‘Our Second, or Queen’s Regiment of Dragoon Guards’. The old distinction of velvet facings for regiments of horse was allowed to be continued, the KDG retaining their blue and the Bays their buff velvet facings. Trumpeters were replaced by drummers and hautbois. Both regiments lost the crossbelts of the horse, together with the flask cords. Carbines were removed, and muskets and bayonets issued. The officers wore gold lace and embroidery, and a crimson silk sash over the left shoulder, while quartermasters had gold lace and the silk sash around their waist, and sergeants narrow lace on the lapels, sleeves and pockets with a worsted sash around the waist.

The clothing warrant for The King’s Dragoon Guards of 1751, which was the same for the Bays except for the regimental colour, facings and distinctions, describes the uniform:

Underneath 1. D.G. in yellow on the blue stripe of the lace.

Drummers and Hautbois: Red coat, blue facings and lining, ornamented with yellow lace with a blue stripe, long hanging sleeves fastened at the wrist, blue waistcoats and breeches , blue cloth caps, embroidered with the King’s Cypher within the Garter and Crown over, the little flap red, with the White Horse and motto ‘Nec Aspera Terrent’, back of cap red with tassel hanging behind, blue turn-up with a drum and 1.D.G. in the middle.

Cloaks: Red lined blue, blue collar, buttons set on at top in same manner as on the coat upon frogs or loops of yellow and blue lace. Watering or Forage Caps: Red turned up with blue, 1. D.G. on the little flap.

Officers: Uniform made up in the same manner as the men’s. Laced, lapelled to waist and turned-up with blue, and a narrow gold lace or embroidery to the binding and buttonholes, buttoned two and two, sash over left shoulder, blue waistcoat and breeches, sword knot crimson and gold in stripes. Horse furniture: Red, with one gold lace and a stripe of blue velvet in the middle.

The main differences for the Bays were their buff facings, waistcoats and breeches, their buttons set three and three, and 2. D.G. on the appointments. The Bays’ drummers and hautbois wore the same red coats faced with blue, and the same blue breeches and waistcoats as the KDG. The horse furniture was buff with royal lace, and the Queen’s Cypher within the Garter.

There are paintings in the Royal Collection at Windsor Castle by David Morier of Privates of the KDG and Bays of this period, showing exactly this uniform. 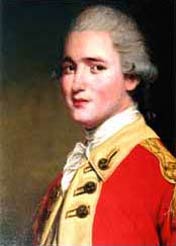 In 1755 a light troop was added, the men wearing the same uniform as the rest of the regiment, except for a helmet of black japanned boiled leather with the Royal Cypher, the crown and number of the regiment in brass on the front, and having a brass crest with a tuft of stiff horsehair, coloured half red and half blue for the KDG, half red and half buff for the Bays. The light troops were disbanded in 1763, but revived again for a short time in 1778, when they were finally removed from all dragoon guard regiments and formed into three separate regiments of light dragoons.

An order of 1764 discontinued the wearing of the aiguillette and replaced it with an epaulette worn on the left shoulder. Officers discontinued the embroidered edging to their coats, and the jackboot was made to a lighter pattern. In 1764 the Bays changed their facings from buff to black. The KDG gave up their blue waistcoats and breeches for the same buff as the Bays in 1767, and the Bays’ drummers and hautbois also changed their blue breeches and waistcoats for buff. This only lasted for a few years, for in 1774 both regiments changed their waistcoats and breeches to white.

A clothing warrant of 1768 allowed the coats to have turndown collars and to button up to the neck: the KDG were permitted to change the ‘1.D.G.’ on their buttons to ‘K.D.G.’; the epaulette was of the facing colour with yellow tape and fringe; black gaiters replaced white for dismounted duties; and the waist sash was of crimson with a stripe of the facing colour. An inspection report of 1768 commented, ‘Officers’ uniforms embroidered with gold; arms and furniture handsome. Trumpeters finely mounted’; and the following year,

Officers’ uniforms very good without any new alteration; buff waistcoats and breeches; gold embroidery; epaulettes; laced hats . . . The Farriers of the Dragoon Guards to have blue coats with blue lining and blue waistcoats and breeches. To wear a small black bearskin cap, with a horse-shoe on the forepart, of silver-plated metal on a black ground, and to have churns and an apron.

In 1784 the facings of The Queen’s Bays were changed from buff to black. In 1787 the dragoon guards were ordered to wear their swords slung over their coats; to allow for this, epaulettes were worn on both shoulders.