In 1843 a new type of brass helmet was introduced with a crest and long black horsehair tail, and this was again replaced in 1847 by the ‘Albert’ helmet with a central spike supporting a black plume. In 1848 the coatee was shortened when, after the Crimean War, it was replaced by a full-skirted tunic, which gave more protection to the stomach, much of the elaborate and expensive decoration being removed at the same time. The new tunic was scarlet with collar, cuffs and edging in the regimental colour, fastened down the front by eight buttons. Epaulettes were replaced by shoulder cords, and officers’ badges of rank were worn on the collar. The ‘Albert’ helmet remained , but the colour of the plume was changed for each regiment, the KDG having red and the Bays black.

The end of the Crimean War also saw the facings of the Bays being changed again from black to buff. In 1864 the loops of lace on the tunic collar hiding the colour of the facings were abolished, as were the loops and button on the cuffs and skirt, and an ‘Austrian’ knot, of yellow for the KDG and white for the Bays, was substituted on each sleeve of the tunic.

There is some evidence to show that the Bays during the Indian Mutiny, and the KDG in China, wore their brass ‘Albert’ helmets with the plume removed and a pugaree wrapped around the helmet. Other evidence indicates that both regiments may have worn an early type of cork pith helmet from time to time.

In 1873 the ‘Albert’ helmet was further simplified, much of the ornamentation being removed, and the badge on the front becoming an eight-pointed star, with the Garter and motto in the centre for officers, and the numerals ‘1’ or ‘2’ for the other ranks. In both regiments trumpeters and bandsmen wore white plumes. The men also were stopped using shabraques, although the officers continued to have them. 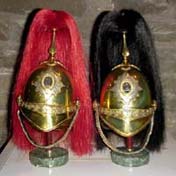 In 1876 patrol jackets replaced the stable jackets for a short time, but the following year there was a reversion to the stable jacket. Officers’ badges of rank were transferred to the shoulder cords, instead of being worn on the collar. In addition, for officers’ tunics, the size of the ‘Austrian’ knot on the sleeves indicated rank, field officers having a triple knot measuring eleven inches from the bottom of the cuff, captains a double knot of nine inches, and subalterns a single knot of seven inches’ depth.

Throughout the late Victorian period undress uniform remained a blue frock coat with regimental patterns of braiding on the breast and sleeves. With this was worn the ‘pill box’ forage cap of blue cloth, with a gold regimental pattern lace band for officers, and for the men yellow cloth for the KDG and white for the Bays.

In 1884 the Bays contingent going to the Sudan wore grey tunics, the regimental insignia being sewn onto the sleeve, with cord pantaloons, blue puttees and brown boots, a bandolier and haversack, with a pith helmet.

With minor changes in detail, full-dress uniform remained the same for both the KDG and the Bays up to amalgamation in 1959. But the Sudan and the Boer War saw the universal introduction of more serviceable clothing than full-dress red, which tended to be used only for ceremonial occasions. The appointment of the Austrian Emperor, Franz Joseph, as colonel in chief of the KDG led to his conferring in 1898 the use of the Austrian Habsburg double-headed eagle as the regimental cap badge. From 1899 to 1900 senior NCOs, and late possibly corporals, wore the Austrian eagle as an arm badge above the rank chevrons. The Bays cap badge was formed of the letters ‘Bays’ in early English lettering surrounded by a wreath of laurel leaves, and surmounted by the Imperial Crown. During the First World War, when Austria was allied to Germany, the KDG were made, in 1915, to take down their cherished eagle badge and replace it with and eight-pointed star, surmounted by the crown, with the Garter enclosing the letters ‘K.D.G.’ in the centre. The Austrian eagle came back into use in 1938 and had been worn since as the cap badge of both the KDG and 1st The Queen’s Dragoon Guards.

During the latter decades of the nineteenth century, khaki had been replacing the old scarlet on active service conditions. India and the Sudan established its utility, and in 1898 an experimental issue of khaki was made, to be succeeded in 1900 by an general issue of khaki serge, which both the KDG and Bays wore in South Africa. 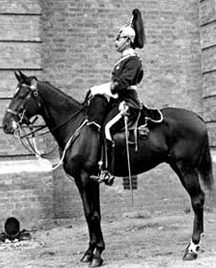 The late Victorian pattern pith helmet was often replaced on the veldt by a floppy broad-brimmed felt hat. In 1902 an Army order laid down the form of dress for occasions when full dress was not to be worn. A peaked khaki cap was worn by all ranks; the khaki tunic was cut loose with two patch pockets on the chest. Officers’ service dress jackets had a khaki collar and tie, and were worn with a Sam Brown leather sword belt. Badges of rank for officers were worn on the cuff. Breeches and brown riding boots were worn by officers, and Bedford cord breeches and puttees by the other ranks. In 1903 the KDG were issued with the much-disliked Broderick cap, and the much-prized Victorian pill-box forage cap was discontinued. The Broderick cap was of blue cloth, round in shape with a projecting rim, but with no peak; it was worn with a chinstrap, and the metal regimental badge of the Austrian double-headed eagle on a red background in the centre at the front. On their return to England in 1908 the Bays were issued with a blue Broderick cap, with the regimental badge on a white patch at the front – the patch later being changed to light buff.

From 1907 to 1914 the KDG in India wore, with their full dress, a white Wolseley helmet, with a brass spike at the crown and brass chin scales, and a red tuft on the left-hand side of the helmet.

During the First World War both the KDG and the Bays wore regulation khaki service dress, with breeches and puttees, the men wearing a brown leather bandolier over the left shoulder. After the war khaki became the normal wear of the Army, and full dress was confined to great ceremonial occasions, musical rides and lev’es. As a result the rather sloppy issue of the war years was smartened up to provide a walking out dress. Officers’ badges of rank reverted to the shoulder.

In 1938 battledress was introduced and with it the KDG won back the wearing of the Austrian double-headed eagle; the badge being now in white metal, or silver for the officers, without the earlier scroll underneath. Battledress consisted of a loose khaki blouse, modelled on a skiing suit, with two patch pockets on the chest and buttoning at the wrists. The trousers had a pocket for a field dressing on the leg and were worn with webbing gaiters. For working dress denim overalls were introduced of the same pattern. With the mechanisation of the cavalry, the black beret was introduced for the Royal Armoured Corps, but the men of both the KDG and the Bays clung to the khaki forage cap until well into the middle years of the Second World War. Officers tended to wear khaki service dress caps, although the occasional beret was seen.

The war in the Western Desert was best know for its informality of dress – corduroy trousers, desert boots, coloured scarves, sheepskin coats. The KDG officers wore a large patch of yellow cloth beneath their metal rank badges on their battledress blouses, a regimental distinction which persisted for some years after the war. The Bays wore shoulder titles in brass, with the words ‘Bays’ in early English script.

Towards the end of the Second World War the KDG instituted the award of a troop leader’s badge for sergeants who had commanded a troop with distinction. It consisted of the Austrian eagle collar badge worn on a background of red cloth above the chevron. 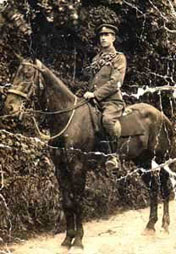 In 1947 a new patrol dress was authorised, with a blue tunic, having a high collar carrying collar badges; two breast pockets with box pleats and button, side pockets without buttons, and a cloth belt with brass buckle, later replaced by a white belt. There were steel shoulder chains, on which officers wore badges of rank, and trousers cut closely; the KDG having a yellow stripe and the Bays white. The cap was blue with a band of blue velvet for the KDG and of white for the Bays. The old gold lace belt and silver pouch box, worn over the left shoulder, continued in use.

On amalgamation of The King’s Dragoon Guards with The Queen’s Bays in 1959, elements of the uniforms of both regiments were combined to constitute the dress for 1 The Queen’s Dragoon Guards. In full dress, still worn by the band and by individual soldiers for ceremonial occasions, the helmet of the KDG had been adopted with a red plume and the figure ‘1’ within the star on the front of the helmet. The band wear a white plume with the helmet and aiguillettes on the shoulder. The tunic is scarlet with blue velvet facings and the Austrian knot in yellow cord on the sleeves, with the Bays’ collar badges. A white waist belt with metal plate buckle is worn, and the pouch belts carry the Bays’ badge on a black patent leather pouch box. The officer’s tunic had gold lace, and the waist and pouch belts are of gold lace, with a silver pouch box, carrying the Austrian eagle. The trousers are close cut overalls of blue, with a broad white stripe, worn over black boots with regimental pattern spurs. 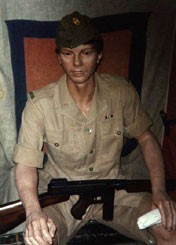 The blue No 1 patrol dress was modified to combine elements of both regiments. The tunic carries the collar badges of the Bays and has chain mail with the shoulder title ‘QDG’ in early English lettering. The officers’ blue patrol jacket has no pockets on the skirt, and the sword is secured by two gold-laced straps from under the tunic. The blue overalls have the Bays’ broad white stripe and are worn over black boots with regimental pattern spurs. The cap is KDG design of blue cloth with a blue velvet stripe and the Austrian eagle as cap badge. The peak of the cap had a broad rim of gold lace for the officers, a thinner band of gold lace for warrant officers, and a plain black peak for all other ranks. The pouch belts for officers are as for full dress, with other ranks wearing a white belt with the Austrian eagle on the buckle.

On amalgamation the khaki service dress of the Bays was adopted for officers, with QDG shoulder titles and Bays’ collar badges, and the KDG cap and cap badge. Other ranks wear the No 2 Service Dress, with the blue KDG cap and working dress a dark blue beret with the eagle cap badge is worn. The stable belt is royal blue. In the QDG lance corporals wear two chevrons, corporals wear two chevrons surmounted by a rank badge consisting of the Bay’s emblem, which is worn by all senior NCOs. Squadron quartermaster sergeants wear four chevrons with rank badge, the whole surmounted by a crown.